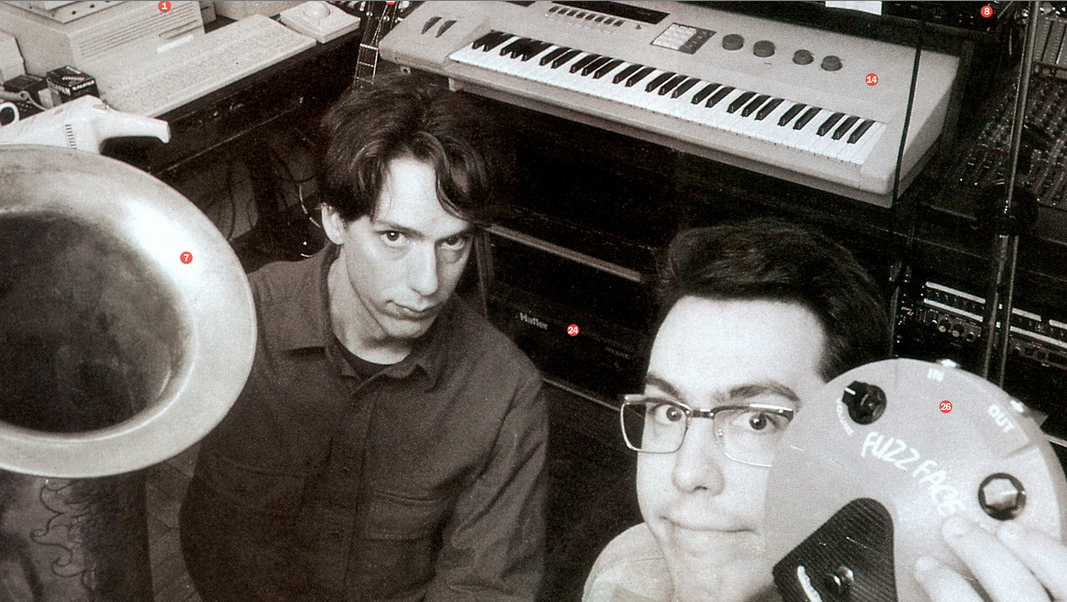 “Our home studios expanded a lot when we were making records with them, like Apollo 18,” states John Flansburgh, half of the terminally twisted duo They Might Be Giants. “Home recording is really the origin of the band: We lived in the same building and started sharing equipment. We were a band that made tapes, rather than a band that played in their garage. We’re a bedroom band.”

Indeed, the studio assembled by the Giants’ other half, John Linnell, crowds one wall of his bedroom in the rough-and-tumble Brooklyn enclave called Williamsburg. Here, and down the street at Flansburgh’s, they concoct demos from which bassist Tony Maimone and drummer Brian Doherty, who joined for the new Elektra album John Henry, flesh out their parts.

The heart of Linnell’s system is an Apple Macintosh IIci (1) running MOTU’s Performer sequencer and Mosaic notator (for horn arrangements), connected to an Opcode Studio Plus Two MIDI interface (2) and Timecode Machine sync box (3). A Cutting Edge hard disk (4) alongside Linnell’s Music Mart accordion (5) doubles as a pedestal for a Bundy bass clarinet (6) — which is not to ignore his prized Buescher bass sax (7). A Yamaha MJC8 (8) distributes MIDI to his E-mu Proteus FX (9) (“this is what I’m using live now”) and Vintage Keys (10), Roland R-8M percussion module (11) and U-220 (12), plus a Casio VZ-10M (13) bought in a closeout sale. “It’s the end of the legendary CZ line,” he laments. “It’s got some weird, cheap sounds you can’t get any other way.” An Akai S1000KB sampler (14) also serves as a master MIDI keyboard. When he’s in a picking mood, Linnell picks up a Gibson SG from the early ‘60s (15). A Boss TU-12H (16) helps keep it in tune.

Flansburgh (who considers his Arbiter Fuzz Face (26) “the ultimate fuzzbox”) has a similar rig — only “much more difficult to operate.” In fact, he hopes to go back to a more primitive setup. “I look back on having an open-reel four-track,” he muses, “where I could just plug my guitar into the front. The minute you get a patch bay — unless you really are an engineer — you can’t work as efficiently. It seems efficient because it’s much more versatile. But home recording isn’t about versatility. It’s about getting the idea down quick.”